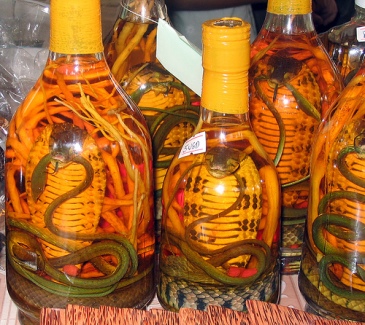 FOR the seasoned-traveler, foreign delicacies are part of the experience.

Tourists can become accustomed to tasting a wide variety of unusual foods, but there are still some dishes that could catch out even those with the most cast-iron stomachs – sometimes with fatal consequences.

This Southeast Asian alcoholic beverage is considered by many to be too risky to even open the bottle. The sight of the bottle would be enough for many and resembles the specimens in jars kept in biology labs. It’s a confronting sight – a snake (the more venomous the better) steeped in a rice wine jar. Known for its curative properties, the drink, which is consumed in shots, is a supposed cure for everything from impotence to baldness. However, fresh is not best. What hardly any traveler to Southeast Asia knows is the snake is inserted into the jar live. The bottle is sealed by a special porous cork that means the snake dies stewing in its own juices. Unlucky tourists whose snake wine hasn’t brewed long enough can be attacked by the snake as soon as they open the bottle. For very few, this has spelled death.

Many tourists like dicing with death. This is why they pack Japanese restaurants to enjoy Fugu sashimi – the so-called filet of Diodon. This is a very poisonous fish, lethal in fact, but is considered a delicacy if it is prepared regarding the rules.

The poison Tetrodotoxin is contained in the fish can lead to an agonizing death causing paralysis, asphyxiation and death – all while the victim is fully-conscious. But the dish won’t lead you to your final destination unless the head chef made a mistake cooking the fish. Unfortunately, some do, more than 400 people die annually from eating Fugu sashimi.

This is a kind of Vietnamese delicacy and a very pricey experience. The salad is prepared of different vegetables and is decorated with true caterpillar. As soon as you are served this rare dish, the caterpillar starts eating your salad…doing so with unbelievable speed. Hardly any tourist can beat it and, after all, it is very offensive when you pay and others eat your salad. But apparently the true delicacy is left after everything is eaten…yes…the caterpillar’s excrement is regarded as one of the best delicacies in Vietnam.

Trepanation of a Monkey’s Skull

You don’t need a medical certification to feel like a neurosurgeon in India and many other parts of Asia. One of the tastiest delicacies there is considered to be monkey’s brain. Usually, the monkey is served with already open skull. Hence, many tourists regard it as dead, but it is believed the brain must be scooped from the skull before the monkey dies. According to tradition, the monkey is only half-dead, so twitching nerve endings as the monkey dies can startle those at the table.

If you enjoy a raw food diet, then pack your suitcases for Korea.

Soon after arrival you should pay a visit to one of local restaurants and enjoy Sannakji or a raw octopus. The dish is usually served with salads and oil to make it taste better. However, the octopus’ suction cups are still active when the dish is served, you should take precautions to avoid the octopus striking back. More than six people annually fall victims to octopus’s tentacles after the active suction cups cause it to stick in their mouth or throat and they choke. You can make this experience totally safe if you cut your octopus into small pieces before you start eating it.

This entry was posted on Friday, April 27th, 2012 at 2:53 pm and is filed under Advice, Countries, Destinations, Miscellaneous. You can follow any responses to this entry through the RSS 2.0 feed. You can leave a response, or trackback from your own site.